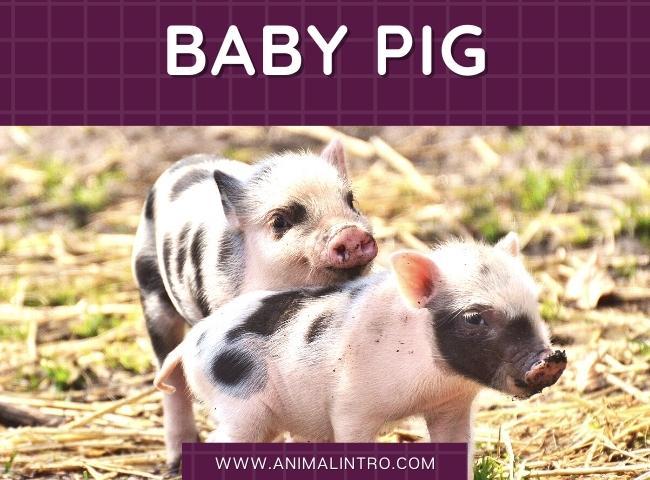 While baby pig may be adorable, did you know that they are an integral part of heart surgery? They are not only helpful in medical treatments but can also be taught to do almost anything you can imagine as long as they have a tasty treat.

Baby pigs can be very fascinating, so let’s dive into five facts about them and some pictures!

Pigs cannot perspire to cool off like humans. Instead of sweating pigs prefer to control their breathing and like to wallow in mud to cool down.

They don’t have sweat glands so they rely on external factors to regulate their body temperature. To keep domestic pigs cool throughout the year, they are often provided with mist.

Pigs are known for being intelligent and clever, but you wouldn’t believe they could learn tricks. Pigs learn tricks quicker than dogs, and they can learn to come when called.

You can also teach your baby pig shaking hands, spinning, sitting and staying. Baby pigs are highly motivated by food so if you show them your favorite snack and ask them to do a small task, it will make them more likely to eat the snack. ‘

#3: Some Pigs Help Save Human Lives

You probably didn’t know that pigs can be used as models for translational research. This means that if a doctor has successfully tested a medical treatment on a baby porcine, it is likely that it will work on a human.

Baby pigs can not only help in medical research, but they are also able to be used in an operating room. For example, pig skin has been used to graft skin in burn victims. Physicians have also had success with pig pancreas cell transplants to improve diabetes management in adults. Finally, pig heart valves can be used in surgery on humans. They are viable for transplant because they have the same size and function as human heart valves.

A pigsty is a messy place. Have you ever seen one? Although pigs are known for being messy, they prefer to keep their living spaces clean. If their living space is sufficiently large, they will separate their toilet and living area.

Pigs can eat cleanly despite the expression “pig out” when they eat. Pigs prefer to eat slowly and enjoy their food, rather than rushing through it. This is a clear indicator that pigs are cleaner than other farm animals.

Pigs, like dogs, love to wag their tails whenever they are happy. This is most common when they are being fed and playing with their friends. Pigs are social animals and obviously very intelligent!

Thai Union recently announced that it will reduce its...
Read more
Hunting

My father's return from bird hunting trips is one...
Read more
dog

Care for your dog with congestive heart failure

Congestive heart failure is a serious condition that can...
Read more
dog

You wouldn't be capable of putting into words the...
Read more
Animal facts

How to Care For Your Reptiles

The second part of our Caring for Reptiles Blog...
Read more